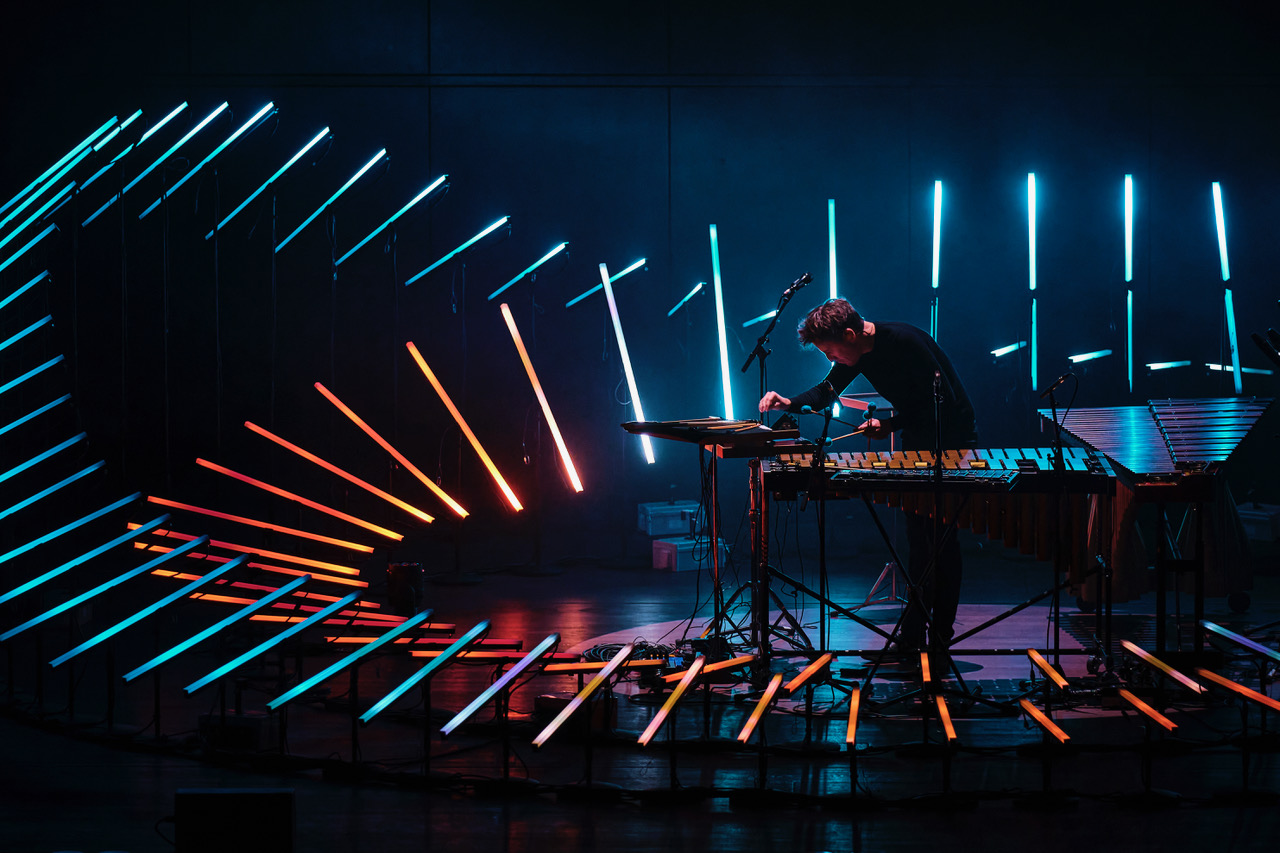 The Italian writer, Umberto Eco once said, “Solitude is a kind of freedom.” The statement certainly strikes a chord when talking about Pascal Schumacher’s latest album, SOL. The vibraphone player and composer, who has made a name for himself in a variety of collaborative endeavours from quartets to symphonic orchestras, has recently discovered the liberation and wisdom of going solo, “I found out so much about myself alone, more than I ever would have imagined,” he says.

Schumacher’s relationship with the vibraphone began as many love stories tend to; at first sight. “I remember from my percussion classes as a kid this golden, sparkly instrument, and as soon as the teacher left the room I couldn’t help playing it,” he reminisces. For those familiar with the vibraphone, the allure will be comprehensible. The set up of shiny plates and cascading tubes, that when struck by mallets produce a sound that is at once metallic and soft, ethereal really. An allure so well captured in SOL’s first track, Amarcord, a one minute tingling and tinkling of sounds, an invitation to the rest of the album so gentle and intimate that it feels more like a seduction, “That sound – for me it was always a magical touch,” adds Schumacher.

But intimacy is not easily attained. And as with most percussion instruments, where mallets or sticks play an intermediary role between player and played, there is distance. “It’s quite a process to become one with the vibraphone. I was always jealous of cello players who have their instruments in their arms and really feel it, embrace it,” says Schumacher, “At first the relationship is a very distant one, the challenge is to become one with the vibraphone.”

For the following decades, Schumacher would venture into this challenge. His relationship with the vibraphone would evolve, shift and strengthen album to album, band to band, in festival stages from Copenhagen to Tokyo. Schumacher argued with the instrument through the agitated improvisational riffs of jazz tunes, and made peace with it in the caress of classical chamber music. And through all the commotion, there was one moment that would always beguile him, that moment of solitude, when it was just him and the vibraphone, “You can be completely creative at that moment, everything is allowed, you don’t need to stick to anything that has been organized or rehearsed… These were some of my favourite moments.” The point of no return arrived when, in 2018, he was invited to play solo for the first time at a festival in Salzburg. “During those concerts, I felt more free than I had ever felt before, and I enjoyed it so much. In the audience there was something very special happening too, they were getting deeper into the music and much more absorbed by it – I had never experienced that before,” he says. Leaving his former band wasn’t easy, Schumacher tells, but there was no alternative, “Coming home from Salzburg I was in love. It felt like cheating because I still had my former project and plans to record an album,” he says. The feeling was too strong to dismiss though, he had to go solo.

SOL captures Schumacher’s newfound passion for solitude in all its magnetism. Yet, it remains true to a relationship’s main characteristic; intimacy. The album’s track Melancolia, conveys a unique isolation which is as sad as is beautiful. Twinkle expresses the extremely personal feeling of enlightenment. Even Tearjerker, a cover of Sakamoto’s famous song, is so intimately understood by Schumacher that it seems he could have himself written it. “When you are playing solo, you are really confronted with yourself. Your strong moments but also your weak moments, which are not necessarily your worst moments. There is something very beautiful about your fragility – that’s often the starting point for magical outcomes,” he says “it’s a really intense thing to play solo.”

Pascal Schumacher studied classical percussion, jazz vibraphone and musicology at music conservatories in Luxembourg, Strasbourg, Brussels and The Hague. He holds a Master’s Degree in musicology from the Marc Bloch University in Strasbourg, and another in music with a focus on jazz vibraphone from the Koninklijk Conservatorium in The Hague. He has won many awards, including the Belgian Django d’Or (2005), Music:LX (2012), ECHO Jazz (2012), JTI Trier Jazz (2014), was selected for the Rising Stars program organized by the European Concert Hall Organization (2009 / 10) and appeared as  soloist in ECHO Klassik 2017 awarded project Überbach.

He played with many of exciting musicians such Francesco Tristano, Bachar Mar-Khalifé, Jef Neve, Kenny Barron & Magic Malik, wrote music for theater and film and leaded a jazz quartet. Today he mixes emotional classical music with minimal electronic sounds, although Schumacher himself considers each classification obsolete. To him, music is a single, limitless playground.

2018 also marked a new beginning for Pascal Schumacher, who upon invitation to play at Jazz & The City Festival In Salzburg, started to develop his own solo material. The experience opened up an entirely new path for the composer culminating in his debut solo album, SOL, that captures Schumacher’s newfound passion for solitude in all its magnetism all the while remaining true to the main characteristic of his relationship with the vibraphone; intimacy. SOL has been released via Neue Meister in June 2020.

Pascal is a Yamaha Artist and a Professor for Jazz and Classical Percussion at the Conservatoire de Musique de Luxembourg. – He is the Artistic Director of the innovative ‘Reset’ Music Festival at Abbaye Neimenster and an Ambassador for SOS Children’s Villages International – Luxembourg.

(…) Intimate, immersive, frequently beautiful, and occasionally disturbing “Sol” represents an impressive statement from Schumacher that brings together various aspects of his work…

It is a consistently calm programme, bright like the sun from which it took its name, delicately intoxicating, as if drifting away in nature on a summer day. – Sol evokes scenes of great beauty, balancing the inspiring with the melancholic or poetic to create a perfect atmosphere, sometimes jazzy, sometimes minimalist or just ‘floating’. Sol is a quiet, contemplative recording, certainly with a calming effect and sometimes transcendental.

(…) Nevertheless, “Sol” is a beautifully calming record that over 15 compelling tracks provided comfort during the first confusing week of lockdown. Now, in more relaxed times, it is aural balm on a sunny afternoon, as exemplified by the title track.